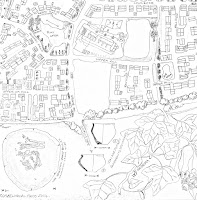 The FOURTH part of the Print-At-Home and colour-in Nature Trail Map of Ridgeway Farm here!!

Featuring The School drawn by a Cherry Trees Class pupil,
The Buffer, Ray Close and the archaeological trenches and burial - did you know this was here?!

July 12, 2019
Thank you for your hospitality and interaction today at the Summer Fair - I enjoyed talking about the project with you and you made some lovely wings!

This is the poster about the launch of the exciting art project coming to the new Taylor Wimpey development near Purton in North Wiltshire.

I will be at the Ridgeway Farm Academy CE School ROOTS PTA Summer Fair talking about the project - come and make a pair of wings from an old map and write down what you hope to see come from the project - if you live on Ridgeway Farm or in the wider Purton community - this project is for you and your public open space.

The is the start of a community consultation period where I will be working with the local community assessing the spaces and watching how they are interacted with by both human residents and the wildlife.  I want to get to know the space and invite residents to join me in some 'Walk n Talk' sessions around the old farm, exploring the spaces and discovering a little more abo…
Post a comment
Read more

January 01, 2015
I thought it would be a good idea to post here about the great news that my father Hector Cole has been awarded an MBE for Services to Heritage Crafts in the 2015 New Year's Honours!

He is really thrilled to get recognition for the 45 years of dedicated work specifically for his arrow-smithing and also within the broad spectrum of iron-working but, as many people will know, there is a lot more behind the award than is ever printed in the press.  I would like to share some of this information with you.

My sister Rebecca first brought up the idea of nominating Dad for an award, she thought he would be a great candidate for an honour and started to look into it.  There is a lot of work behind the scenes to make it happen and we were too late for that year so put it on the back burner.

In 2014 I saw a tweet from www.heritagecrafts.org.uk asking if anyone knew a suitable crafts person to nominate for an honour.  I immediately tweeted back suggesting my Dad, Hector and it snowballed from …
Post a comment
Read more

Here is a sneak preview of The Map for Ridgeway Farm residents that is work in progress on my drawing board.
I have some illustrations from residents, photographs and drawings from Ridgeway Farm Academy Cherry Trees class to add to the border and reverse side as well as a story about the site written by another resident.
If you would like to contribute it's not too late - just get in touch!


Thursday 9th April 2020 from 1.45 - 4pm Easter Holiday - Free Workshop.
A Wildlife Wonder Photography afternoon with Iain Green and Melissa Cole as part of the on-going Ridgeway Farm Art Project.
Bookings are being taken for up to 10 parent/grandparent/guardian and child places(age up to 16 need to bring an adult with them!)

Art and photography students and amateurs welcome to bring their own cameras and learn from Iain. www.wildlifewonder.co.uk