A Bit About Me!

Graduating in 1993 with a BA (Hons) in Art Education Studies from The University of Wales, Melissa embarked on a successful full time career working with her chosen medium of sculpture made predominantly using traditional forging techniques.

Trained as a traditional blacksmith by her father Hector Cole MBE FWCB, Melissa started making bespoke domestic iron work for private homes and hotels; curtain poles, window furniture, lighting, gates and railings are still made to order.  Awarded a Setting Up Grant from ACE in 2001 allowed Melissa to get new equipment for her own forge in Savernake Forest.  Her forge is now in the Pewsey Vale. 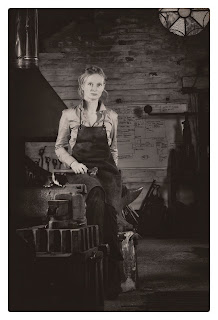 Smaller sculptural work is created from re-forged antique wrought iron, sourced from restoration projects across the country. Larger work is made from other metals, steel, stainless steel and copper using a combination of traditional and contemporary making techniques.

Following the success of Chippenham Community Art Project which Melissa devised and raised funds for, she was commissioned by Dolby Laboratories Inc. to create a large projecting wall sculpture for their European H.Q. in Wootton Bassett. This important commission enabled Melissa to develop her sculpture work alongside the commissioned pieces and schools work.

Specializing in giving young people the opportunity to create their own work on the forge, she has visited over 35 school and community groups across the south of England. Various projects that Melissa has worked on have been funded by Arts Council England, The National Lottery, Barclays New Futures, The Ironmongers Company and The Golsoncott Foundation. 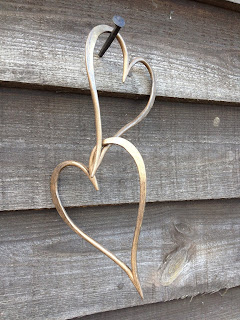 Most of Melissa's work is forged in a traditional coal forge from mild steel, a readily available and relatively easy metal to work with. This can be finished with zinc; galvanising or hot zinc spraying to prevent rust and then a top coat which can inject a splash of unexpected colour and even metallic sparkle – this is a recognisable aspect of her forge work! The use colour on architectural metal work – gates and railings often lifts a simple design and makes a statement throughout the year. Metal doesn't always look its best in black as it flattens all the hammer work which is a distinct feature of Melissa's work.

Some of the smaller garden sculptures are re-forged from antique wrought iron sourced from restoration projects in old buildings and churches around the country. Wrought iron has a low carbon content which makes it softer to work on the anvil but more unpredictable. The iron has a grain similar to wood and asking the metal to make forms against its natural grain and pushing her technical skills.

Wrought iron is worked at a higher temperature than steel and does not corrode in the same way as steel. The finished work can be treated with zinc or painted. Where possible the work can be waxed and allowed to develop a patinated surface that shows the natural quality of the iron. These works can be shown inside or out. 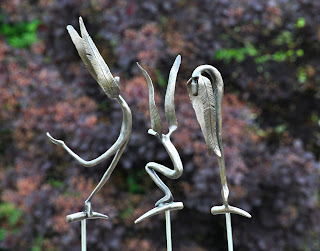 Bronze: Having some work cast from original forged pieces; taking a mould from the forgings allows for the exact reproduction of each hammer blow. The bronze work Melissa has done is with artist Nick Davis at his foundry where she is directly involved in all the complex casting processes, including the fettling and patination.  The series of figurative works 'Ladylovelywings' are a limited edition cast in bronze.

Please contact Melissa if you would like to visit or to discuss commissioning a sculpture or work for your house or garden. Working with clients to create pieces that fulfil their requirements and challenge design and making skills id an enjoyable aspect of Melissa's work.

If you are new to the commissioning process, Melissa can give you some advice and guidance. Usually larger projects or purchases are paid in instalments which often helps both parties!

January 01, 2015
I thought it would be a good idea to post here about the great news that my father Hector Cole has been awarded an MBE for Services to Heritage Crafts in the 2015 New Year's Honours! He is really thrilled to get recognition for the 45 years of dedicated work specifically for his arrow-smithing and also within the broad spectrum of iron-working but, as many people will know, there is a lot more behind the award than is ever printed in the press.  I would like to share some of this information with you. My sister Rebecca first brought up the idea of nominating Dad for an award, she thought he would be a great candidate for an honour and started to look into it.  There is a lot of work behind the scenes to make it happen and we were too late for that year so put it on the back burner.  In 2014 I saw a tweet from www.heritagecrafts.org.uk asking if anyone knew a suitable crafts person to nominate for an honour.  I immediately tweeted back suggesting my Dad, Hector and it snowball
Post a Comment
Read more

January 05, 2021
Wiltshire Life  – Individuals Arts, Culture & Music Award Winner 2020 Moravian Star inspired Public Sculpture for the new Rausing Building (Athelstan Museum) in Malmesbury, Wiltshire, UK.  This public sculpture was commissioned by Angela and William Sykes and the team organising the renovation of the former Moravian Church in Malmesbury as a new community building and extension of the Athelstan Museum. In October, I was awarded the Wiltshire Life 2020 Individual Arts, Culture and Music Award for my work in visual arts and crafts and for the     Moravian Star Inspired public sculpture for the garden area of the new Rausing Building ( Athelstan Museum wing) in Malmesbury , Wiltshire.   It was a really lovely surprise to be a winner and I am really delighted to get some recognition for my work and this sculpture in particular which is a really dynamic and uplifting piece of public art in my home town. Many thanks to everyone involved in this piece of public art including my worksh
Post a Comment
Read more
April 21, 2021
Spring 2021   After a quieter winter in the forge than normal, I am back running my blacksmithing day courses as per Government guidelines with one to one sessions for the people that have had their courses postponed from 2020.    Ridgeway Farm Art Project is currently awaiting planning approval for both the entrance sign and the Community Orchard - I very much hope that these two aspects of the project will get moving soon!   In the meantime, I am drying some larch boards ready to make bat boxes to go on oak posts in the hedgerows around the development.  When community groups can safely and confidently meet again I still want to do community making sessions for residents to make their own bat boxes.   I have been working on designs for another public art project in Oxford and very much hope this will be approved and I can make the lovely pieces I have designed. I was sent some great photos of Chippenham Town Bridge - a piece I designed many years ago which still looks great today!
Post a Comment
Read more