May 11, 2013
This is the last forging day on the project, the last day for anyone who hasn't had a go at making a feather in copper, wire bird or forged feather to try their hand. 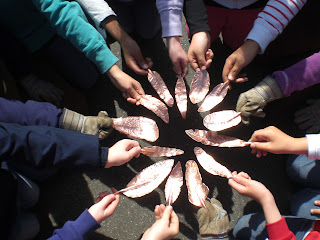 I had four members of staff come and forge feathers for the bird designed by Toby, this will be just small forged feathers put together to form his bird, pretty much just like his drawing.

Year 5 came and made individual copper feathers to take home, they worked really well as a class and the end results were fantastic.  Year 6 made small wire birds in the afternoon, again to take home.

Today we had Jack, a pupil from Windsor school come with a professional photographer (David) to document the project.  Jack only stayed for an hour due to exams but David stayed all day capturing the processes and children at work.  This was organised by Joy Harris Service Children's Education Arts Adviser who also visited.  Joy has been involved in sorting the contract for this project working with Mike Chislett to make it all happen behind the scenes.

I had lots of visits from classes to bring me drawings or pieces of creative writing which I am keeping in my sketch book for this project. Jasmeet from Year 4 wrote "Beautiful 3D birds flap around the red British mail box going to wonderful places"  Perfect!

At the end of the day I laid out on the playground the finished birds for everyone to see and the wire birds were placed on the 'bird table' in the tent. 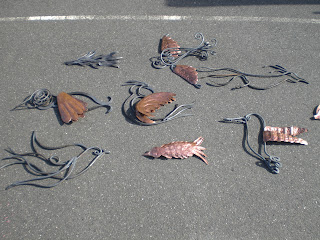 Because this was the last forging session, I offered to do a demonstration for parents and children at the end of school, making a snail to climb up the post box stand.  I had an able assistant in parent Matt who pumped the bellows and had a go at drawing down - an appropriate technique given that this is the same military terminology for the closure of JHQ.

I thought maybe a few people might show up and I would do a little bit of chat as I worked but I was very wrong!  Rather brilliantly Sheila, year 1 teacher closed her class room early and stuck a note on their door asking parents to collect their children from the forge area of the playground, some 500 metres away from their class room.  Sheila has regularly brought her little ones over to watch the forging during the two weeks, they always wear white hats that they have decorated themselves!

There were a lot of parents and children there!  I was quite taken aback and genuinely surprised to see this.  Jason and Bill from Cassells House also came to watch which was very lovely.  I worked on the snail as fast as I have probably forged a 12mm dia bar.  Fortunately it all went well and I finished in about 35 minutes without burning the eyes off the snail.  I was kindly given a bunch of lovely tulips at the end - I love getting flowers!

It was as great way to end the project and the fab poster that Mr Rowles drew for this demonstration event will go on my workshop wall!  It was really good for so many people to see the post box and birds at this 'work in progress' stage and get people taking about where it should be located at the end.  There is a train of thought of it being placed in the woods at JHQ, so you would stumble across it.  I like this idea but worry it wouldn't be looked after.  I think it is as great idea for a post card though so will try to do this before I send it back finished, I would like everyone at the school and at JHQ to have a post card image of this sculpture to keep.

I have one more morning session to do with Foundation Stage pupils and then load up the kit and say my goodbyes - that is tomorrow- today was great!

January 01, 2015
I thought it would be a good idea to post here about the great news that my father Hector Cole has been awarded an MBE for Services to Heritage Crafts in the 2015 New Year's Honours! He is really thrilled to get recognition for the 45 years of dedicated work specifically for his arrow-smithing and also within the broad spectrum of iron-working but, as many people will know, there is a lot more behind the award than is ever printed in the press.  I would like to share some of this information with you. My sister Rebecca first brought up the idea of nominating Dad for an award, she thought he would be a great candidate for an honour and started to look into it.  There is a lot of work behind the scenes to make it happen and we were too late for that year so put it on the back burner.  In 2014 I saw a tweet from www.heritagecrafts.org.uk asking if anyone knew a suitable crafts person to nominate for an honour.  I immediately tweeted back suggesting my Dad, Hector and it snowball
Post a Comment
Read more

January 05, 2021
Wiltshire Life  – Individuals Arts, Culture & Music Award Winner 2020 Moravian Star inspired Public Sculpture for the new Rausing Building (Athelstan Museum) in Malmesbury, Wiltshire, UK.  This public sculpture was commissioned by Angela and William Sykes and the team organising the renovation of the former Moravian Church in Malmesbury as a new community building and extension of the Athelstan Museum. In October, I was awarded the Wiltshire Life 2020 Individual Arts, Culture and Music Award for my work in visual arts and crafts and for the     Moravian Star Inspired public sculpture for the garden area of the new Rausing Building ( Athelstan Museum wing) in Malmesbury , Wiltshire.   It was a really lovely surprise to be a winner and I am really delighted to get some recognition for my work and this sculpture in particular which is a really dynamic and uplifting piece of public art in my home town. Many thanks to everyone involved in this piece of public art including my worksh
Post a Comment
Read more
April 21, 2021
Spring 2021   After a quieter winter in the forge than normal, I am back running my blacksmithing day courses as per Government guidelines with one to one sessions for the people that have had their courses postponed from 2020.    Ridgeway Farm Art Project is currently awaiting planning approval for both the entrance sign and the Community Orchard - I very much hope that these two aspects of the project will get moving soon!   In the meantime, I am drying some larch boards ready to make bat boxes to go on oak posts in the hedgerows around the development.  When community groups can safely and confidently meet again I still want to do community making sessions for residents to make their own bat boxes.   I have been working on designs for another public art project in Oxford and very much hope this will be approved and I can make the lovely pieces I have designed. I was sent some great photos of Chippenham Town Bridge - a piece I designed many years ago which still looks great today!
Post a Comment
Read more